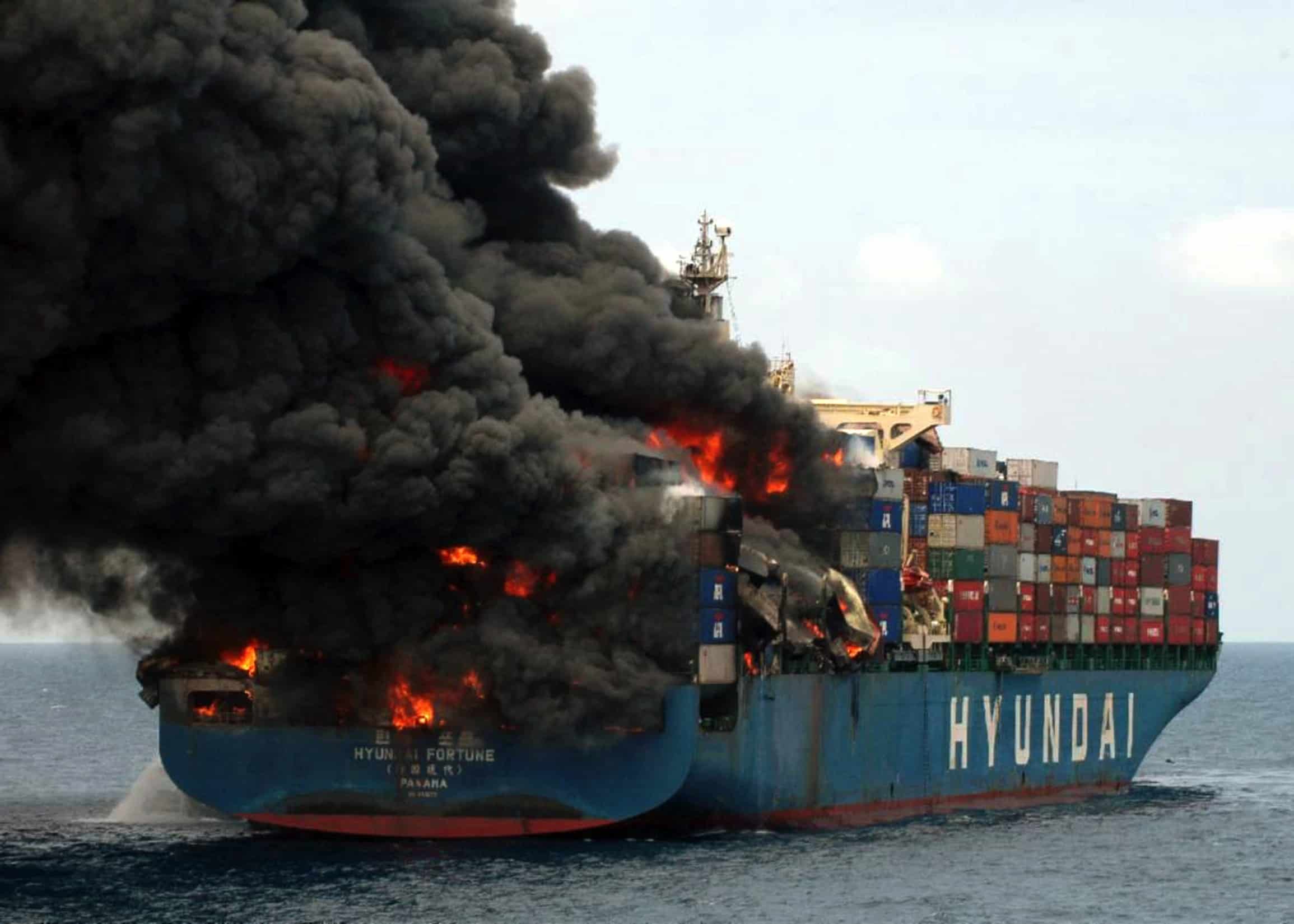 Last summer in the middle of a heatwave there was a fan on in our house to help the air move around, and maybe, just maybe, cool things off enough to sleep. In the middle of the night, I woke up half-dressed, filled with adrenaline. Because the fan was off.

On a warship one of the most deadly threats to sailors is fire. A ship is essentially a tin can, without good ventilation parts of the ship run out of oxygen. In a fire, good ventilation turns the air toxic and helps the fire spread. The first system the engineers crash when a fire alarm comes in is the ventilation. It happens moments before the general alarm is raised and the ship becomes eerily quiet. That stillness means get ready for an emergency.

This planet is, in essence, one large biological spaceship. And one of the most deadly threats to our existence is the climate emergency. We can’t live on this planet if it becomes uninhabitable. A lot of us will die if the climate becomes inhospitable but survivable. The best way to ensure our collective survival through the climate emergency is to prevent it from happening.

But right now the ventilation is crashing.

Scope of the problem

These large numbers are really too big and abstract to process so let’s bring it back to grade three and fractions. We need to reduce emissions by at least a third. Now pause, take a look around your house and take stock of your emissions. Do you knit? Take Aspirin? Do you wear clothes? Is everything you buy from the grocery store packaged in oil? Do you eat meat? Do you eat at all? Do you watch Netflix? Do you drive? Do you live in a building? You get the point. It’s everything. So when it comes to your personal responsibility in the climate emergency a rough rule of thumb is that for every single thing you currently do, you need to do a third less of that thing and everything will solve itself. Easy and feasible, right?

No, it’s massively unrealistic. It is nearly impossible to feed yourself or live in a building right now in Canada without contributing to the climate emergency. You are extremely limited in your ability to make beef producers pollute less, even if you individually stop eating meat.

The scope of the challenge facing us and the consequences of failure are so large it’s almost impossible to conceptualize.

It’s important to take a step back here and say even though there is almost nothing that you can do as an individual to reduce your carbon footprint in any meaningful way towards our emissions goals, this is not a personal failure. It is a coordinated bamboozle from big polluters to trick us into thinking the products we buy from them can prevent the climate emergency. From personal carbon footprint calculators being popularized by British Petroleum to this 1970s ad to greenwashing, there’s a lot of money being spent to make you think the climate emergency is your fault. It’s not. It’s also not hopeless, there are things you can do. We’ll come back to that.

The disaster of disaster capitalism

But markets aren’t quite that straightforward. Some aspects of climate emergency prevention have markets popping off. Prime Minister Trudeau unveiled a plan to plant two billion trees over the next ten years. The government says this will reduce our carbon emissions by 12 of our required 218 megatonne reduction. Trees act as a carbon sink, have a slew of other benefits, and are a good part of a broader, robust climate action plan.

But it also means trees are now a hot commodity.

The city of Halifax used to pay around $500 per tree but this year each tree costs $800. Meaning the HRM has to plant fewer trees or pay more money. When the Parliamentary Budget Officer looked into the cost of the national tree planting policy, their report said the federally budgeted amount to pay for trees was too low. This is likely at least in part because the policy was crafted without factoring in the increased demand for trees announcing the policy would create.

Buildings are also a massive source of carbon emissions. Good news; there are homes so efficient they can be heated by a hairdryer. Bad news; when there’s a high demand for construction materials the prices skyrocket. Though some can afford to pay for renovations to make their home energy efficient, not everyone can. Even with rebates, people just don’t have cash on hand to pay the upfront costs of home retrofits on the back of two ‘once-in-a-lifetime’ economic downturns in the past 15 years. If governments are serious about tackling the climate emergency they’re going to need to pay the upfront cost of the solutions to it. But that costs money, and more money means cutting services or higher taxes, or both.

Our political leaders have fully embraced the market-based solutions theory because it doesn’t require coming up with money to pay for things up front. In other words, they like market solutions because it means they don’t have to raise taxes.

A carbon tax is a great example of a market-based solution to the climate emergency. The theory says if carbon pollution is taxed it becomes too expensive and people stop polluting because they can’t afford it. It was a popular idea among Canadian conservatives, including Ontario Premier Doug Ford, until Prime Minister Justin Trudeau implemented it. But as it currently is, it’s kind of useless. In Canada, for a carbon tax to be effective reports suggest it needs to be priced at $210 per tonne by 2030 to meet our emissions targets. Right now it’s $40 per tonne and according to Trudeau will slowly increase and max out at $170 per tonne in 2030 (we can only assume as the rates aren’t set yet past March 2022). And since it’s rebated in most provinces, the average Canadian faces no net financial penalty for their environmental choices. Many big polluters can exempt much of their emissions from the carbon tax too. In fact, since the carbon tax has been implemented Canada’s emissions have gone right back up to 730 megatonnes as of 2019, the latest year with data available.

The political problem with making the carbon tax effective is people would notice their wallets getting lighter from jacking up the tax to $210 per tonne. It would be unpopular and whatever party did it would probably lose an election. Politicians are terrified of doing anything slightly unpopular and losing elections.

This phenomenon can be seen everywhere. In Halifax, the regional municipality does its budget deliberations in public. Which means, for the six people watching the live stream budget meetings, the political decision making is completely on display. These meetings are the reason my internal ‘something’s wrong’ alarms are screaming.

If we want to get serious about tackling commuting, driving needs to become massively inconvenient or massively expensive. Alternatively, we could properly fund public transit as a public service but that would require a fairly substantial tax increase. Neither one of those gets enough votes to win an election but doing either one could cost enough votes to lose one.

Put plainly, implementing policies that would adequately address our climate emergency doesn’t win elections, so there’s no reason for our politicians to implement them. Our politicians want to look and say the part, but no one is willing to do it.

This is depressing, is there anything I can do?

Yes, there is. Even though individual actions like riding a bike or eating less meat don’t do a lot, they still help. But it’s like bailing water out of a ship without fixing the hole letting the water in. The hole is so large it can’t be remedied by people bailing water out. We need to fix the problems in our system. And we need to force someone to do it for us because most of us are too busy just surviving to do it ourselves.

Luckily for us, there is a system in place that allows us to change the world by simply writing an email every month or so.

When HRM councillors received pushback making them scared to cut municipal services it was revealed the extent of that pushback was a handful of emails complaining about it. A handful of people scared councillors into action.

So, here’s a simple three step guide for what you can do to help prevent the worst of the climate emergency, which, unlike recycling your plastic, can actually affect our current climate trajectory.

It’s important to remember that it’s not completely hopeless. There are things we can do to prevent the worst of this climate emergency from happening. It’s just not the things we’ve often been told to do. Living our lives the way we do is causing the climate emergency. So if someone tells you they can solve the climate emergency without impacting your life, it should sound too good to be true. Because it probably is.

You need to keep up what you’re doing, because it is important, but we need our politicians to match our effort. It’s critically important and they won’t do it unless you make them. We don’t need to change our politician’s minds on this issue, we just need to force their hand. We need to let them know that when they do the right things, we’ll grumble and complain like any sailor worth their salt, but we’ll have their backs if they have ours.

14 secondary suites have been permitted since legislation passed

Heritage district for downtown to be considered