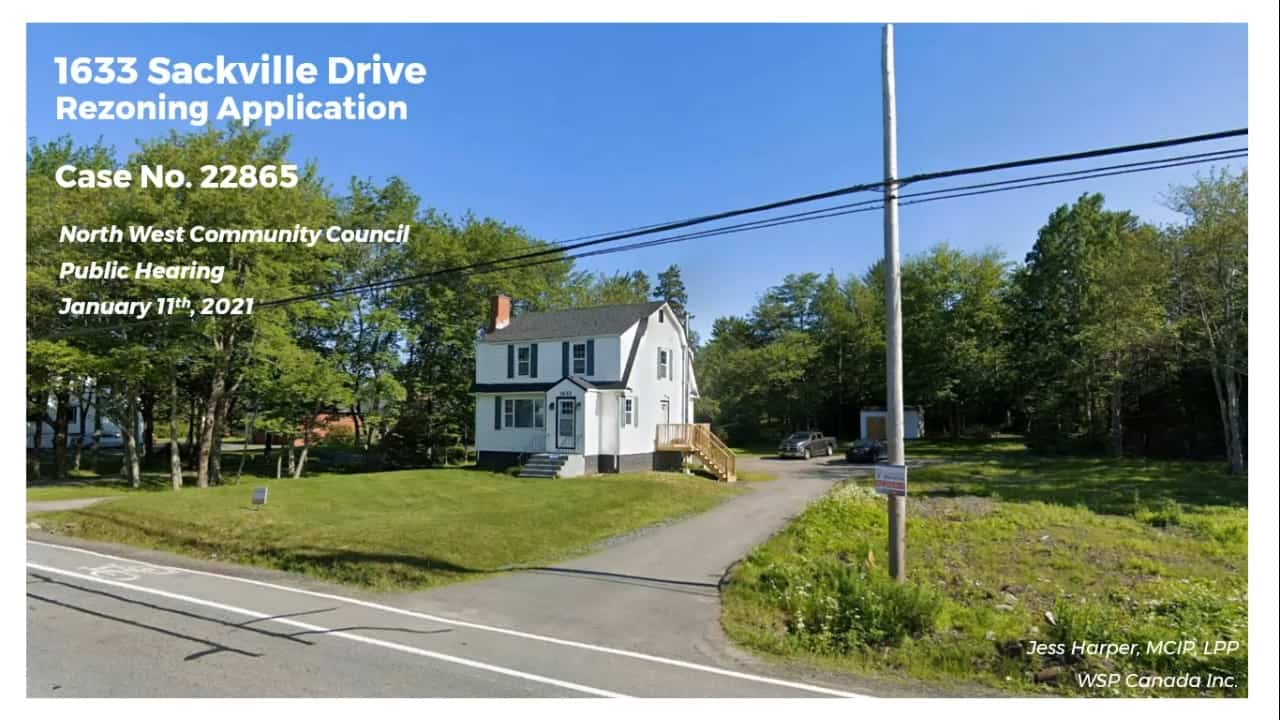 Two townhouse developments were approved by the North West Community Council tonight, both of them within a block of each other on Sackville Drive in Middle Sackville across from the Petro-Can.

The first townhouse development, proposed by the property owner via WSP, is between Lively and Wilson Lake. There were no major concerns identified and the application breezed through the process before receiving unanimous approval to be rezoned. The next step in the process for this development is the development agreement.

The second proposal was from Walid Jriege who’s also trying to build townhouses on Wilson Lake Drive. The initial proposal from Jreige brought up a lot of concerns. In the initial application, the city was worried traffic and utilities could not be adequately installed on the property and the community was concerned about traffic.

In the public hearing today a member of the community called in and again expressed concern about the traffic on Sackville Drive. Melissa Boland said that even with traffic reduced due to COVID, it’s still getting worse. Busses rejoining traffic can cause traffic jams. She noted that each individual development is just a drop in the bucket, but over time it’s getting noticeably worse, and wanted to know if the city had a plan.

As an aside, when I was doing an assignment for my journalism degree in 2016 I had the same concerns about increasing traffic and was reporting on two developments proposed for Quinpool (Quinpool and Preston, and Quinpool and Vernon). I asked Jacob Ritchie, who was the head of the Centre Plan team at the time, about it. “We don’t have a traffic problem,” he said in 2016. “Each development is just a drop in the bucket.” So take from that what you will.

The way the city does public engagement meant that there was no real answer provided to Boland’s concerns. City staff were on hand to confirm that these seven units won’t have a significant impact on traffic, but couldn’t answer larger questions about the city’s traffic plan.

The development ended up being approved unanimously, but with an amendment that will require the driveways on the property to be one way; one entrance, one exit.

Russell: The first case this evening is 22865, which is a rezoning. Welcome to the public hearing. But there are no registered speakers for this case. This is how you can sign up to be a speaker, have we received any correspondence?

Staff (Brittney MacLean): This is to rezone from rural residential to multiple unit zoning. It’s on Sackville Drive, there’s a mix of housing and commercial buildings in the area. It’s planned for behind the house that’s currently on the land, it wouldn’t change. Four units is the maximum for the amount of water available on the property, so that would be the max for the property. The North West Planning Advisory Committee recommended this be approved. Staff makes the same recommendation. Questions?

Russell: Anyone got any? Public hearing open, we have the applicant on the line.

Applicant (Jess Harper From WSP): The developer did an as-of-right development to find out how many lots could be on the property and found it was five. With the existing house that’s staying, that’s how we got four townhouses. It’s close to bus stops and bike lanes, and it’s right next to amenities (the Petro-Can and Tim Hortons on Sackville Drive). We’ve included eight parking spots but only need six. We haven’t finalized the plan yet. Most people have two vehicles per household, but even if they don’t it allows for visitor parking. Benefits; more rental units, reusing existing driveway, not taking down the house that’s there. Thank you.

Deagle-Gammon: Is there only one entrance and exit for the new four units?

Harper: One driveway for the house, one for the four units.

Deagle-Gammon: For the four townhouses there’s only one way in and out?

Deagle-Gammon: The PAC (Planning Advisory Committee) didn’t consider the one entrance and exit?

Russell: Are you thinking of the next application?

Applicant: We did a traffic impact statement and it found no significant impact.

Blackburn: This is a driveway, not a private road? This is the driveway for the civic address?

Staff: Yes probably, but they wouldn’t do that until permitting.

Deagle-Gammon: On the water, is there a concern about the water table around this development?

Staff: No, the comment was about the as-of-right density. Halifax Water would only permit four.

Lovelace: This is the kind of proposal I really like. It’s people who take vacant land, add housing for a community that needs it, close to amenities. I understand that we can’t make the applicant add accessibility, but has there been a discussion at all about this?

Applicant: No, we haven’t reached that stage of the design process and were concentrating on this part of the process, but I’m happy to bring that to them.

Russell: Close the hearing and the vote?

Blackburn: (Reads the motion for agenda item 10.1.1 as written) As the councillor for the area, I haven’t heard of any major or serious concerns. There was one, but he’s sorting his issue out with Halifax Water about stormwater runoff. I don’t think the people driving on Sackville Drive will notice it’ll be there. As long as it’s not a major development, which it isn’t, no one has issues with this.

Russell: Onto Case 21863, our second public hearing, the format is the same. This is how you can sign up to be a speaker and there is one speaker, who will be called to speak… in order. Clerk?

Clerks: One piece of correspondence.

Staff (Paul Samson): This is an application for a seven townhouse building and is also on Sackville Drive. The driveway would be on Wilson Lake Drive, the sewer and water connections would be from Sackville Drive. The owner has owned this land for about thirty years and now wants to develop it. City policies allow this plan. Initial proposal was 10 units on two lots. It also showed 10 driveways. There were a lot of issues raised initially about driveways and service. If the building was subdivided the services would need to be too. So the options were to rezone or just do one building with more than six units. Halifax Water said they could service seven units, so this application is seven units. Two driveways, entrances and exits on both, both on Wilson Lake Drive. (This proposal being down the street from the one you just read about has the same amenities around it). During the initial public engagement, there were concerns about traffic, driveways (from when the plan had 10 driveways planned). The North West Planning Advisory Committee recommended the development proceed but consider making the driveways one way, and council can do that if they want. Staff recommend approval, as well.

Blackburn: Where are the plans for the traffic lights at Wilson Lake and Sackville Drive?

Staff: I don’t have an update on that, but this development proposal wouldn’t warrant lights.

Staff: Mr. Jreige is on the phone and available to answer questions, but doesn’t have a presentation.

Russell: Questions? I have one, do any of the proposals involved require blasting?

Boland: I live in Middle Sackville, I’ve been a resident for about five years, and in those years I’ve seen a bunch of developments go into Sackville Drive and I’m concerned about the rise in traffic on Sackville Drive. I’ve seen developers’ promises disappear and the bike lanes on Sackville Drive are unsafe. The turning lanes in the area are very tight, and it’s very dangerous to make a left-hand turn on Sackville Drive and Wilson Lake Drive. It’s clear that the public’s concerns aren’t being addressed. I recognize it’s only a few townhouses and it’s only a drop in the bucket, but if a bus is trying to get back onto the road, it can cause a traffic jam, even during COVID. So what is the city doing to deal with the overall congestion in the community (story coming in the next week about this)? If the driveways are one way who’s going to be policing it? There’s a ‘no left turn road sign’ that everyone ignores already. If it’s not going to be rental units, with no landlord to maintain the amenity spaces, who is responsible for maintaining that? What are the proposed businesses?

Staff: The driveways won’t necessarily be one way, that’s to be decided yet. But how one way driveways could be enforced? That’s difficult. As far as maintenance is concerned, it’s written in all development agreements, and it’s the owner. So the landlord, or individual, whoever owns it. I can only speak to the traffic around this development, but our traffic department is responsible for that.

Staff: I can’t tell you exactly, but this examination happens during permitting, in detail.

Lovelace: I’m just asking because the congestion in the area is getting worse, so the further away from Sackville Drive would be better.

Russell: Close the public hearing? Any further questions from councillors?

Blackburn: I’d like to forward a motion; move to amend to include an entrance only and exit only driveway (but everything else from motion on agenda basically the same).

Russell: Can we do this?

Lawyer: It needs to be friendly, so the developer needs to accept it.

Staff: The recommendation from the PAC was to make the first driveway entrance only and exit only the second one, is the wording of this motion the same?

Lawyer: It doesn’t need to be the same wording, and we may want to leave that open for the development officer to be able to make the call on the detailed examination later on in the process.

Blackburn: I was on the PAC at the time and heard much of the debate, which is why I made this amendment. Development needs to be the right time, the right place and the right development. We have two of three right now, and we’re so close to getting it the rest of the way there. I support this with the one way driveways.

Staff: Would the committee want this to be a non-substantive clause? (Non-substantive means it doesn’t require a public hearing, just a council vote if it needs to change).

Outhit: I think it should be substantive. If Blackburn wants to add an amendment I’d say it’s substantive. But first, can we get the applicant to weigh in?

Staff: The applicant is still on the line.

Russell: Do we need to re-open the public hearing or can we just ask him?

Lawyer: I think we can just ask him.

Outhit: Ties in with my experience

Russell: Motion on the floor, with the amendment, call the question? 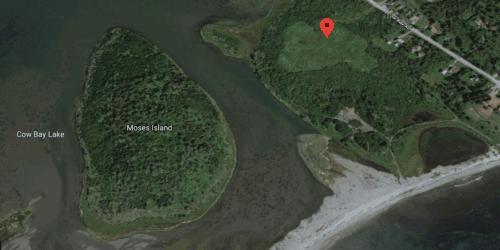